We’re delighted to announce the release of the first ever CiteAb market report. Formulated through processing hundreds of thousands of peer reviewed academic papers published over the last five years, we’ve created what we believe is one of the most comprehensive snapshots of the state of the global bioscience market available.

What is most exciting, is that the data suggests that China is set to claim the lion’s share of global bioscience research, overtaking the United States within the next five to ten years.

“The data from CiteAb clearly shows that China is the big winner in bioscience research at the moment.”

Our database of over 1.8m antibodies and over 330,000 antibody citations gives us a solid overview of the amount of research being carried out in over 100 different countries.

Our Founder, Dr Andrew Chalmers, said: “The data we have in CiteAb highlights the number of academic research papers using antibodies that are produced by each country, and therefore acts as a fantastic indicator of bioscience research activity around the world.

“The data we’ve pulled from CiteAb clearly shows that China is the big winner at the moment. The United States has been the most productive nation in bioscience research for a long time, but has seen a gradual decrease in percentage output since 2010.

“Conversely, China’s output has been growing enormously since around 2009 and if current trends continue we may even see China overtake the USA as soon as 2019. To counter this, the USA will need to increase investment in bioscience research.” 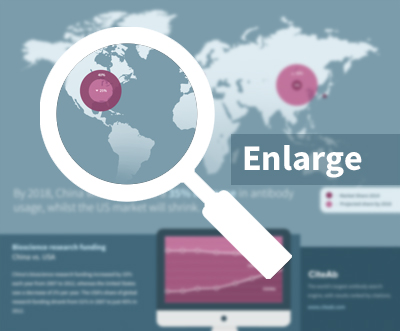 Speaking about research in the USA, Neal Kitchen, product manager at Thermo Scientific, said: “The general outlook is that the budget position in the US is mostly stagnant. NIH funding is showing a slight increase this year, but it isn’t enough for labs to feel comfortable with expanding and taking on the more aggressive or ambitious projects.  ‘Caution’ seems to still be the theme, which limits the amount of money labs are willing to spend.”

The data that we’re making available today also suggests that Japan’s share of the world’s bioscience output has gradually fallen since 2009.

Dr Chalmers adds: “A continued drop in Japanese bioscience research output is likely to cause the country to fall from second in the world in 2009 down to fifth. Germany and Britain appear to remain stable, so they are likely to become the third and fourth most active bioscience research nations as Japan drops down.” 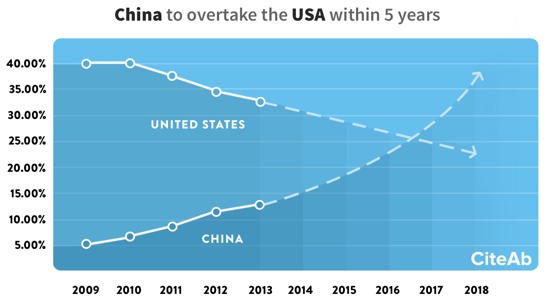 Dr Chalmers said: “We know that China’s most recent five year plan makes research in this sector a priority for the country, and the data we’re extracting from CiteAb demonstrates that this policy is having a direct impact on the quantity of research we see coming out of the country.

“The quality is also there – China has doubled the number of articles in high impact journals between 2008 and 2010. This is highlighted by Cell Press who run a number of spotlight supplements focused on China’s research and in Nature China which highlights the best research from Hong Kong and Mainland China.”

Unlike common questionnaire based datasets, which are often subjective, here at CiteAb we gather our data by processing hundreds of thousands of academic papers each year. Matt, our Development Manager, pulls out verified information that allows us to show trends in growth or decline, biggest winners or losers, comparisons between competitors amongst a host of other trends across a number of topics including countries, antibody suppliers, antibodies and research areas.

If you’d like the data for the top 10 countries for free, want to request the full data set of all 70 countries we list, or are interested in exploring any of the other market intelligence data CiteAb has to offer, drop Matt an email on matt@citeab.com and we’ll happily chat further about your needs.

About the author
Andrew is the CEO of CiteAb. He has a background in Cell Biology, having led a research group at the University of Bath before founding CiteAb.
More posts by andrew
Blog home page