This week, Jack Connor McBride, a Computer Science student from the University of Bath, has joined the CiteAb team for a three month placement over the summer.

Jack, who is originally from Didcot in Oxfordshire, was looking for a job for the summer and wanted to gain experience in the computer science industry, so decided to apply for our placement scheme. 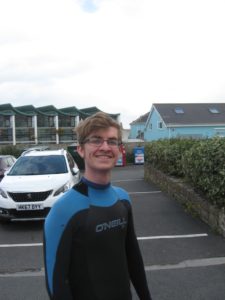 Rob Willison, CiteAb software developer, will be overseeing Jack’s work while he’s with us. Rob says: “When we met Jack we could see he’s very perceptive and understands problems quickly, and he was very enthusiastic about finding and implementing solutions for CiteAb.

“While he’s with us he will be working on rearchitecting some of our software. He is going to focusing on an area where we have some inefficiencies in how the code works, to find a solution that improves efficiency and is scalable.”

We asked Jack what he hopes to do when he finishes this placement and his University degree. He said: “I would like to be a software developer and work for a company which is good for the world – no big corporations that are sacrificing the environment to make more money. I would also like to work somewhere like CiteAb where there is a nice work-life balance.”

Outside of his academic and work commitments, Jack has lots of hobbies. He enjoys longboarding and owns two longboards, one of which he won last year in a raffle after a charity event where over 100 people longboarded from Bath to Bristol. He also enjoys surfing and recently went to ‘Westward Ho!’ for a week of surifng after his University exams. He is hoping to go on some spontaneous surf weekends with his friends when the surf is good over the summer. Jack also plays bass guitar and was in a band during his gap year.

Dr Andrew Chalmers, founder of CiteAb, said: “Its great to have Jack join the team for the summer and I’m sure he’ll bring a very valuable contribution to our platform development. Welcome to CiteAb Jack!”

– Katrina and the CiteAb team