Which antibody suppliers are challenging the big players?

In the full dataset we cover market share for all suppliers, however on our blog today we are focusing on companies that have managed to grow from fairly lowly positions in the ranking, and capture more than 1 per cent of market from the top few.

The first of these succeeding companies is Novus Biologicals. The company, which was founded in 2007, has an extensive catalog of over 100,000 products which is divided into specific research areas and pathways. Novus has over 120 research areas in which customers can search for products and read up-to-date background information.

Ten years ago, Novus claimed a 0.36 per cent share of total citations. This, however, has grown to 1.27% in 2016’s data, placing the company just outside the top ten.

Dr Andrew Chalmers, founder of CiteAb, said: “Novus has clearly experienced a successful ten years. However, our data does show that the company’s growth has slowed over the last few years, and in 2014 it became part of the Bio-Techne group. It will be interesting to see if this helps to reinvigorate its offering and allow Novus break into the top 10 in the near future.” 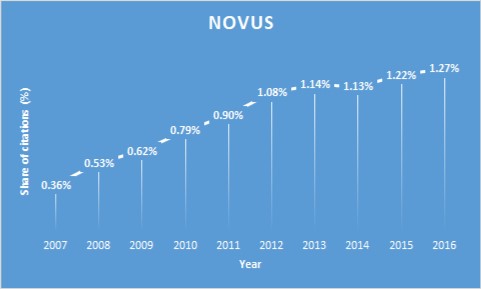 Another company showing interesting growth statistics is BioLegend, with a citation share that has developed from 0.04 per cent to 1.35 per cent over the last ten years. The company is currently celebrating both its 15th anniversary and making it into the global top ten.

Dr Chalmers said: “The growth that BioLegend has seen is enough for the company to sneak into the tenth place. It also has a positive trajectory in citation share and impressive growth rate. BioLegend initially developed its strength in flow cytometry and if it can continue to grow from this early strength then it will be a real challenge to some of the more established players.” 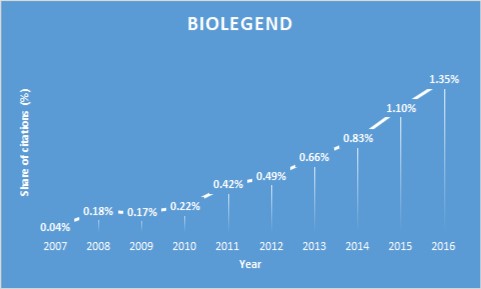 The final challenger is Proteintech, which has grown its share from 0.01 per cent to 1.21 per cent of the market. The company’s focus is on manufacturing all of its own products, and impressive growth has seen its rank increase from 56th place to 14th. By coincidence, Proteintech was also founded in 2002 and so are also celebrating its 15th anniversary.

Dr Chalmers said: “Proteintech seems likely to break into the top 10 over the coming years – it has made significant gains and its trajectory is increasing. The next challenge for Proteintech will be in positioning itself to take on the biggest suppliers in the market.” 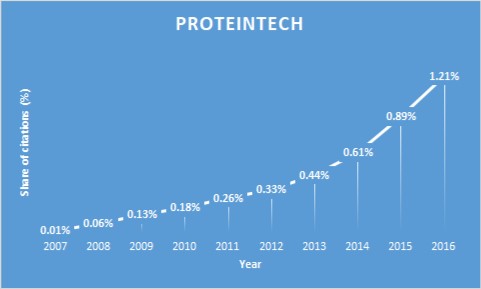 Dr Andrew Chalmers, founder of CiteAb, said: “As always, to produce this report our team has extracted data for hundreds of thousands of specific antibody citations and used this to show supplier share trends for over 120 suppliers.”

– Alicia and the CiteAb team