Which are the key antibody companies to watch?

Last week we released our annual update on the global antibody supplier market, outlining those companies that have recently entered or neared the top ten, and have grown their share of the global market by over one per cent in the last year.

Today we address another interesting part of this dataset – the companies that are still modest in size but have an interesting growth trajectory that might suggest they’ll be the challengers of the near future.

Dr Andrew Chalmers, founder of CiteAb, said: “First up we see BIOSS, a company we first highlighted two years ago in a blog about our supplier share data. At that time we highlighted that BIOSS was a very small company showing very impressive growth, and from our latest data we can say that this has continued through 2015 and 2016. The next challenge for BIOSS will be in maintaining this trajectory with the aim of claiming further market share.” 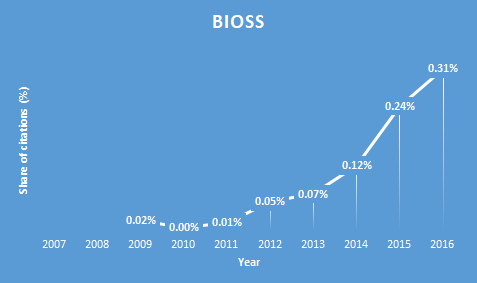 Another company that we picked out of the more than 100 in the report is Miletenyi, founded in 1989 by Stefan Miltenyi. The company now has over 1000 employees, and has diversified its product offering from its initial focus on the magnetic cell separation invented by its founder.

Dr Chalmers said: “Miltenyi has shown continued growth over the last five years. In the antibody market, it is focusing on producing recombinant antibodies under the REAfinity brand, aimed mainly at flow cytometry and microscopy. Our data suggests that this approach is paying dividends, and the company has grown its market share significantly. Miltenyi has proven its success in other reagent markets and it will be interesting to see if it can crack the antibody market.” 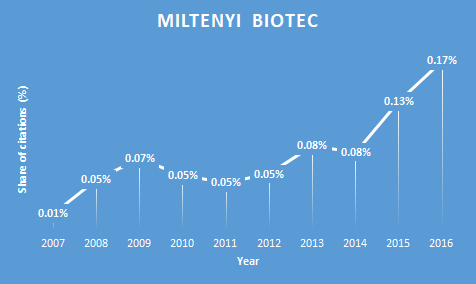 Finally, OriGene, founded in 1996, stands out. As with Miltenyi, this is a company that has a lot of experience in other reagent types and is making good headway into the antibody market. OriGene now has over 50,000 primary antibodies and a number of brands. These include UltraMab antibodies which are tested on high density protein arrays, and TruMab which are mouse monoclonals raised using full length human proteins as antigens.

The company’s share of the antibody market is modest but it continues to grow steadily, making it a real candidate as a future top-ten challenger. 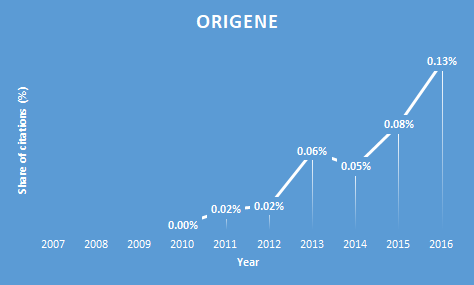 Dr Andrew Chalmers said: “As always, to produce this report our team has extracted data for hundreds of thousands of specific antibody citations and used this to show supplier share trends for over 120 suppliers. Over our two blog posts we only have space to cover a few of these suppliers, focusing on those that we feel are particularly interesting. Do watch this space though, we will return to this dataset and cover other interesting suppliers in the future.”

– Rhys and the CiteAb team